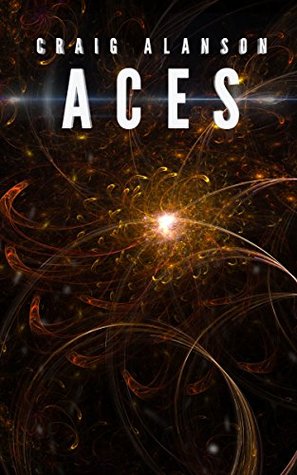 This Aces book review is going to speak about how good the book is. NOT about if this is a book that is similar to what Craig has done in other books. The reason that I bring this up is that there are a lot of reviews that are not happy with this book because it is not Expeditionary Force.

Aces bring a family together to move to Valhalla. This location is far away and the setting is on the transport ship. The father of the family is a research scientist that wants to go to Valhalla. There is some really good things there that would further his career.

The wife is happy and willing, while the kids are split with the decision. The oldest daughter is not pleased with losing her friends while the youngest son is all about adventure and is looking forward to this.

What happens next is what really surprised me though. I knew that the kids would be involved, but I did not think that they would be the main characters. Knowing this, the story does have a childish way of thinking of things. Alanson does build them as characters and you get to know them pretty good so when the story takes off you can continue to grow with them.

It does revolve around the children. ACES is a name they give for the people that run the ship. They same ship that the family is on during their journey. There is a small story on the beginning of the journey, but it really kicks in after all of the character development is done and the second half starts.

The real story is when the pirates take the ship with a cool diversion. It is something that starts in the beginning and you really don’t know what is going on at first, but then become clear.

After the takeover, the adults are separated into their own stories. The children are the main story with the father as the secondary and the wife in the tertiary. No one really knows what the pirates are after and it is explained in the beginning of the story so the reader knows. The ancient artifact that the pirates want is totally unknown to everyone and the kids just randomly found it.

This is the part of the story that I had issue with. It is more of a problem with many entertainment things out there right now. Making the kids know more than the adults. Disney really annoys me with this concept in most of their shows. More on that in a different blog

The children find a way to both annoy the pirates and to outsmart them. They are really too young to do this, but the story is interesting on how they do it. Childish, yes. On the planet is where the father get sent and stuck while the wife is stuck on a saucer separation issue if you know anything about Star Trek. As the kids are finding a way to bring the saucer back or at least get to them, the dad is rescuing the people on the planet.

ACES all comes together really fast. I thought it was too fast, but it made for some good action. Each person was not flushed out though in what they were doing and why. The father had a violent encounter and that is one of the things that Alanson did do well in keeping the kids away from the violent encounters. The mother is just waiting and worrying. The kids getting to the saucer was too fast and really not reasonable either.

In the end, I found that this book was enjoyable. Yes, it was an easy read and maybe should have been listed as such, but it was still a good book.

You can find ACES here and keep in mind that this is an Amazon link which I am an affiliate.