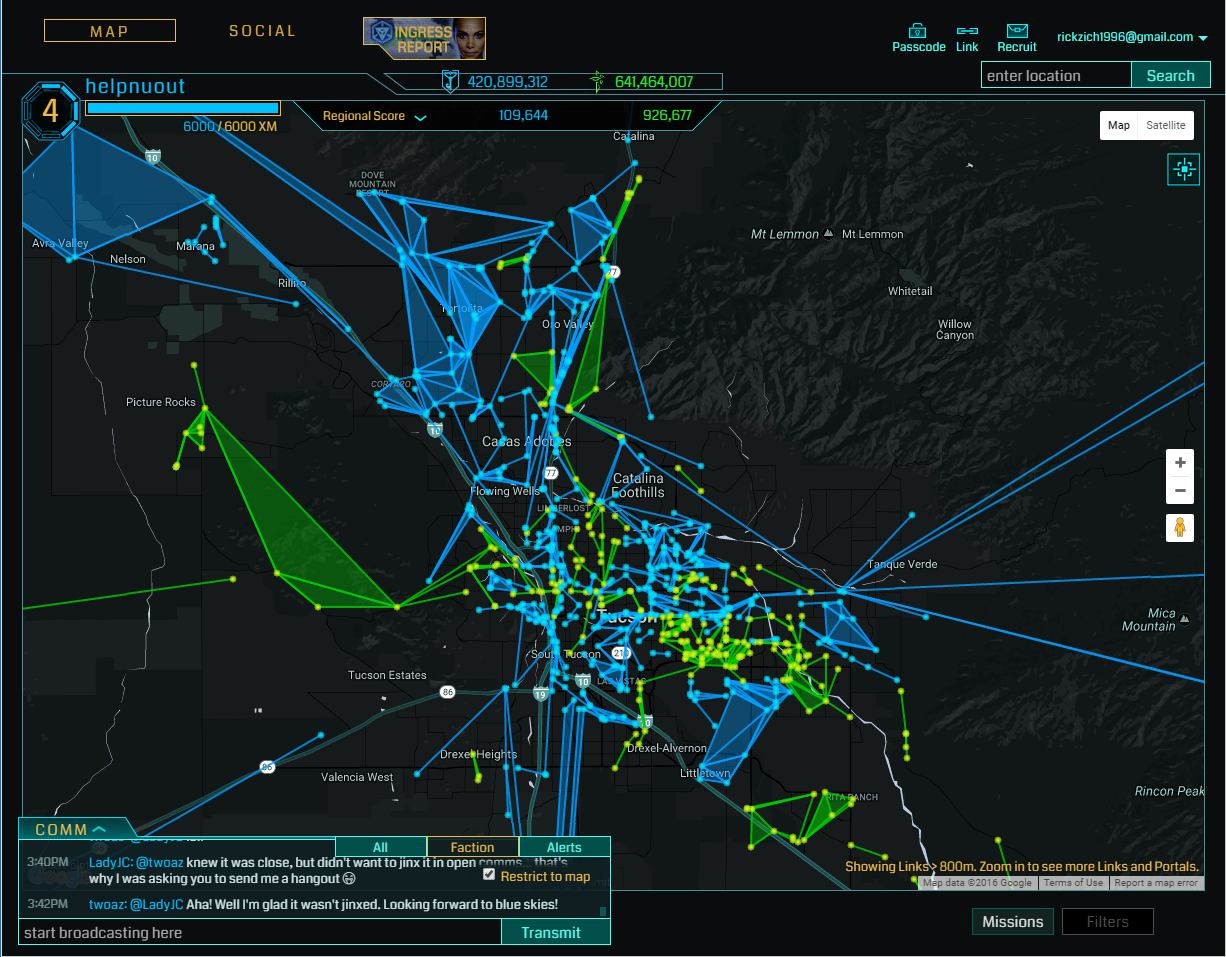 Ingress review was not something that I thought I was going to get into.  I thought I was just a bit too old to continue to play Pokemon Go though and after a week I realized that it was not fun.   I have spoken about Eve Online and fact that it takes a lot of work to get anywhere and the ramifications of making mistakes can be big.  I have been playing Ingress for about a week and it has ramifications, but not nearly as big as EO had.  More than Pokemon Go though and that is why I am liking it.

First, this is a game that is meant to be played on the mobile handset.  You can see certain things on the desktop, but only to view.  The actual playing part has to be done on the mobile device.  The premise of the game is to hack and take over portals that are placed around your surroundings.  you can see in this picture to the left the are of Tucson and the many portals that are around.  I have not take the opportunity to actually count them, but there are hundreds. 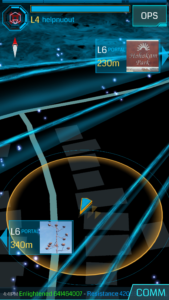 You find these portals using your mobile phone and the “scanner”.  There is limited range that you can see objects.  Maybe a half mile in a 360 degree circle.  So, you get out of your house and go for a walk.  Now, you most likely are going to cheat and get into your car.  I live in a more rural are so the places are few and far between, but in a city, you can find them pretty easily.  You will walk up to a portal to get in range.  The circle around you determines the range.  Press on that portal and you will get options to 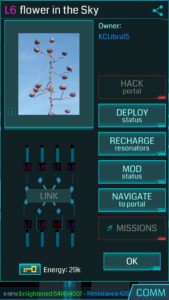 do things.  Hack, Deploy, Mod, Navigate, Missions and then to exit, or OK.  Press one of them.  Once you hack a portal you will get things in return and it will use some of your XM.  This is the stuff that we are all fighting over and there is a longer story, but in short, this is what you want.

The next thing that you want to do is to deploy and this is where you will put “Resonators” on the portal.  You get these by hacking.  The mod option will be opened to you once you have 1 resonator in place.  This is where you can put things like shields and turrets on your portal.  Once you deploy 8 resonators, you have a fully charged portal and then the link option will become available.  That link option allows you to put multiple portals together and if you make a triangle of portals you create what is called a field.

Pretty simple.   Then comes the other team.  See you need to pick sides when you start up and you need a Google account to start. Did you realize that Niantic was a company that was originally from Google and Ingres is the result.  And that all this mapping technology is using Google maps.  Another long story, but a very cool one.  Look it up sometime.  You get to be the resistance or the enlightened.  In my case I chose the resistance so I am blue.  The other team will try and take out your mods on your portal by attacking it with electronic devices.  Kind of like and EMP bomb.  Not violent, but it takes your stuff down.  So the fight goes on.

Back and forth it will go.  Right now the enlightened are really kicking the ass of the resistance worldwide in Ingress.  In Tucson, the resistance is doing well.  So that is it.  You could fight for an area and fully engage all the portals and then an hour later, your stuff is gone and you have to start over.  All of this will create AP which is how you determine levels.  I currently am about to reach level 5 of 8.  So probably take me a few more weeks to reach 8 as it gets more and more difficult to level with the more AP points to each level.

This has been a lot more fun than Pokemon Go as I like the back and forth.  We will see how it goes once I level to 8 though.  Keep watching here as I will post what are called Ingress Codes.  You can google search for them as well, but if you want, just come back here and I will link them up and show you how to use them.