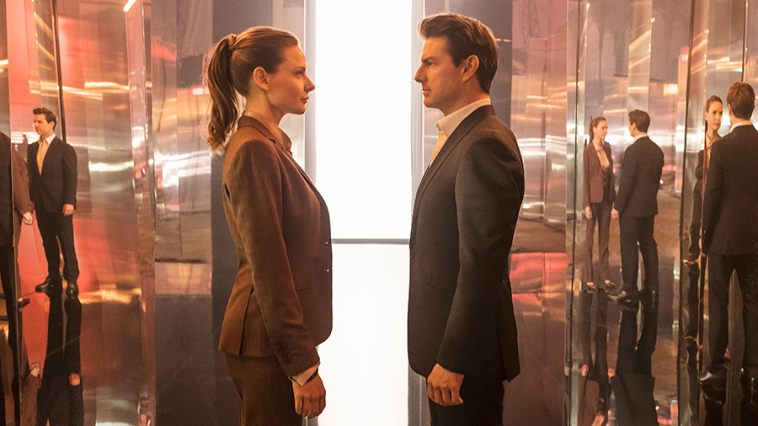 Mission Impossible Fallout is the sixth movie in this franchise. I went to the IMAX theater in hopes that the movie would be enhanced. There was only 1 trailer that I watched to prepare for this. And I was unprepared.

What I thought was unique is that the timeline was right in with the last movie. This was not what I was expecting. I originally thought that Mission Impossible Fallout would have been relating to something nuclear. It was more about the remaining Rogue Nation. I still think that it does relate somehow to nuclear considering that the premise of the film was to keep three plutonium cores from becoming bombs and blowing up. The opening sequence shows Ethan losing those cores and the rest of the movie finding ways to get them back.

Cruise really pushed himself in this role as he took to an amazing skydiving sequence and even learned how to pilot helicopters for this role. Fallout upped the ante for action. I was wide eyed and looked over to my wife numerous times throughout the movie in the hopes of getting some relief to the frenetic pace.

Every time that I thought we had a moment, something new came up that made you think about how the story is unfolding. Superman’s Henry Cavill plays a CIA assassin August Walker. The two of them engages in a bathroom brawl. To me, that has now become the baseline for what fights should look like. Not like a Neo type Kung Fu fight, but a brash knock down. A few moments of trying to get back to the plan, the loser wakes up and the fight starts AGAIN! This time, the two are rescued again by another familiar face, Isla from the last movie. One single shot breaks the fight and the story gets even more convoluted from there.

One of the things that I was disappointed to see in the trailers was Cruise riding a BMW instead of the trusty Triumph bike. He rode a Speed Triple and Daytona in MI2, but not to despair as Isla what riding a Triumph chasing them around in their BMW’s. Cruise is one of the biggest bike fans as he integrates them into many of his action films. Top Gun, Edge of Tomorrow, Mission Impossible being the most notable.

That chase scene, as incredible as it was, did not compare to the cringe worthy ending helicopter chase. There was a lot that happened to get to this point. It is hard to pull everything together as the all-star cast including Cruise, Cavill, Bassett, Rhames, Pegg, and Baldwin all had great roles, but relative newcomer to the big screen Vanessa Kirby from “The Crown” series had a fantastic supporting role as well.

The story has taken you back and forth so many times that you are now really wondering what is the straight story. The CIA double crossed the IMF but then got double crossed by Syndicate agents still infiltrated deep into the CIA. Hunt barely escapes, but loses Solomon Lane in the process and the ending is set.

As mentioned in the beginning. I know that the nuclear bit had to come back. It came back with a vengeance too. Solomon Lane ends up knowing where Ethan’s previous wife was and brings her into the fold along with then IMF team and Isla. Everyone he cares about are at risk and he is chasing a helicopter with the the key to their life or death.

Usually you need to just find a way to disarm the bomb.  This is different though as they need to ARM it first and then disarm them. Yes, both of the bombs together have to be disarmed at the same time within 15 minutes so the last half hour of the show is INTENSE!

Needless to say, everything works out in the end. Lots of smiles, but no definite way to go forward, but it also does not show an end. In fact, I think it points more to a show where Ethan takes the IMF lead as Baldwin’s character dies.

Mission Impossible Fallout is great and it appears like rotten tomatoes score shows that lots of people are liking it too. Watch it in IMAX as that was the way the movie was shot in the first place.