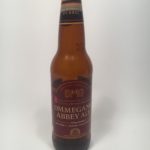 Ommegang Abbey Ale is brewed by the brewery in New York.   Even though Cooperstown is know more for being the baseball hall of fame town, the brewery is after changing it to the beer hall of fame.  This particular Belgian Dubbel has 8.2% alcohol.  I will be right up front though, these kind of beers are not necessarily my favorite but it has a very rich ruby red color and when poured it has a really nice tan colored head up but it does disappear pretty quickly and there is some lacing, but not a lot.

The aroma was not real strong the first go so I did try another bottle to make sure.  That one gave you that the licorice coriander that I was looking for.  It is not overpowering though.

The taste was just a hint of the aroma.  Definitely giving you that coriander and a sweet kind of orange flavor with lots of malted caramel backbone.   Overall the carbonation was pretty low I was kind of surprised it seem like it all disappeared in the head. This does help in the flavor perception though. Overall it’s a very good beer it’s not one that I would drink many of while sitting at the bar. 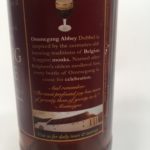 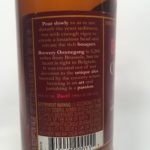 It is an unquestionably great beer.  Belgians are not my favorite and sweetness belongs in soda, but not to worry. It was smoother than I had anticipated and definitely very rich overall. I definitely recommend it.

I try to go over to beer advocate to take a look to see what what they say all the beer advocate score is 92 which listed as outstanding in the bros score is 100 so pretty damn good overall.